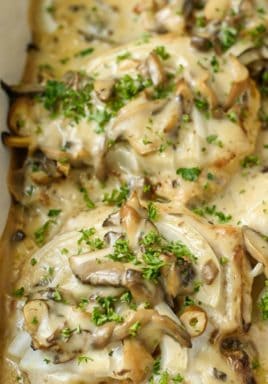 Pork Chops with Mushroom Gravy is about to become one of your family’s dinnertime favorites. In this delectable recipe, juicy pork chops are lightly breaded and fried, then baked in a cream of mushroom gravy that’s to die for.

Thanks to a few canned ingredients this recipe is much easier to make than anyone would believe when they see it on the table. Serve it with roasted potatoes and parmesan zucchini or a fresh spinach strawberry salad for a dinner feast to satisfy a hungry crowd. 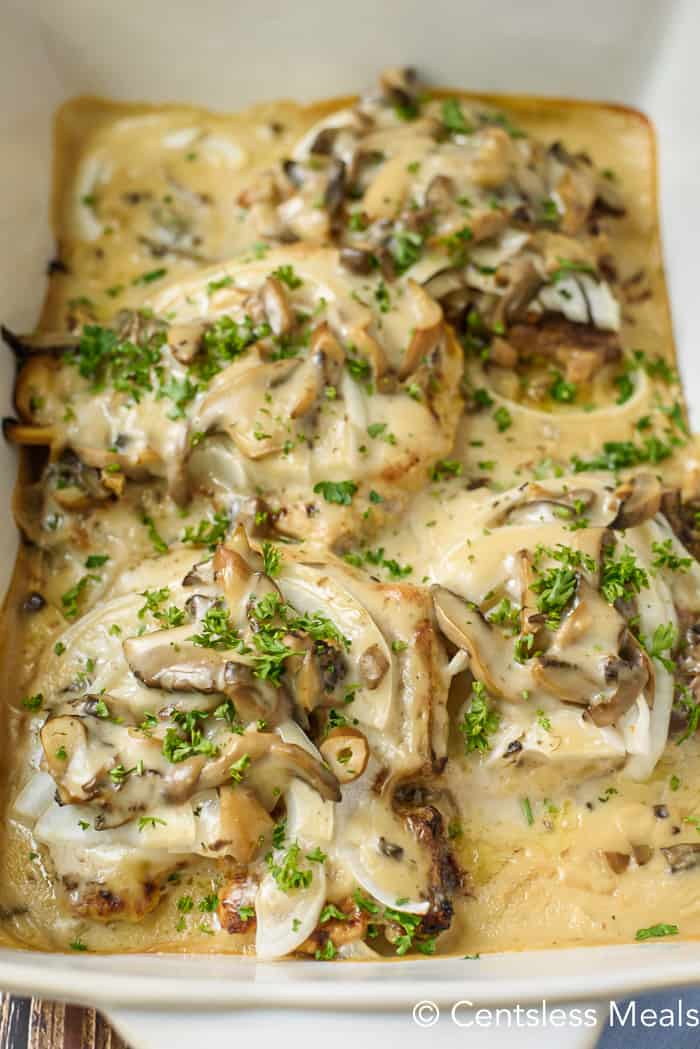 Pin it to your DINNER BOARD to save it for later!

You won’t believe how quick this dish comes together. For a flavorful and tenderness in both the meat and gravy, don’t cut the bone or trim the fat from the loin chops! Does it get any easier?

To Make the Casserole:

To Make the Mushroom Gravy:

Let it rest for a few minutes then serve.

You can substitute fresh sliced white button or baby portobello mushrooms. Saute them first before adding to the recipe to bring out the meaty mushroom flavor. 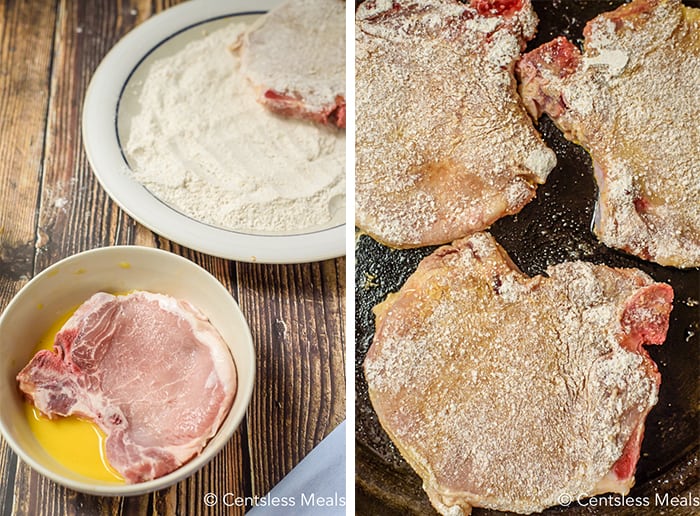 What Temperature To Cook Pork Chops To

According to the U.S. Department of Agriculture pork is safe to eat at an internal temperature of 145°F, followed by at least 3 minutes of rest time after removing from heat. For best and safest results, use a meat thermometer to be sure you don’t over or undercook your pork chops. 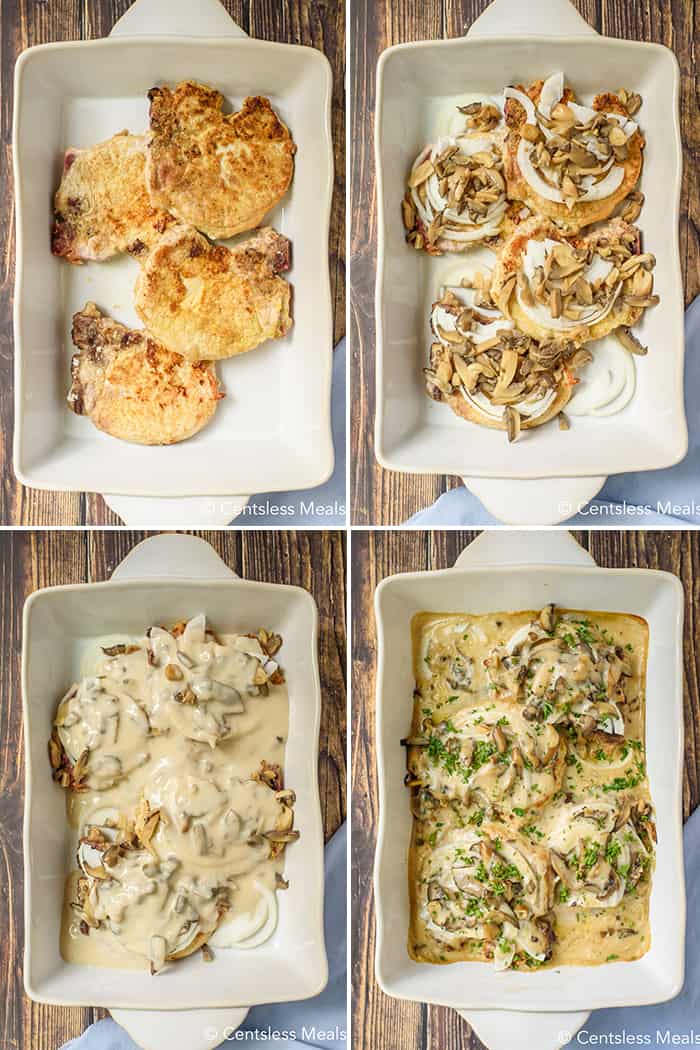 How to Thicken Gravy

This recipe creates a fairly thick gravy, especially since it’ll be baking uncovered and much of the excess moisture will cook off. The light breading on the chops also provides some thickening action.

But for a thicker sauce, make a slurry from 1 tablespoon of flour whisked in ¼ cup water. Stir it into the mushroom soup and evaporated milk mixture before pouring into the pan.

If you’ve never mixed flour and water, here’s how to keep it from getting lumpy:

Tip: Make sure the mixture is smooth before adding more water. Continue adding water slowly until you achieve a pourable consistency. 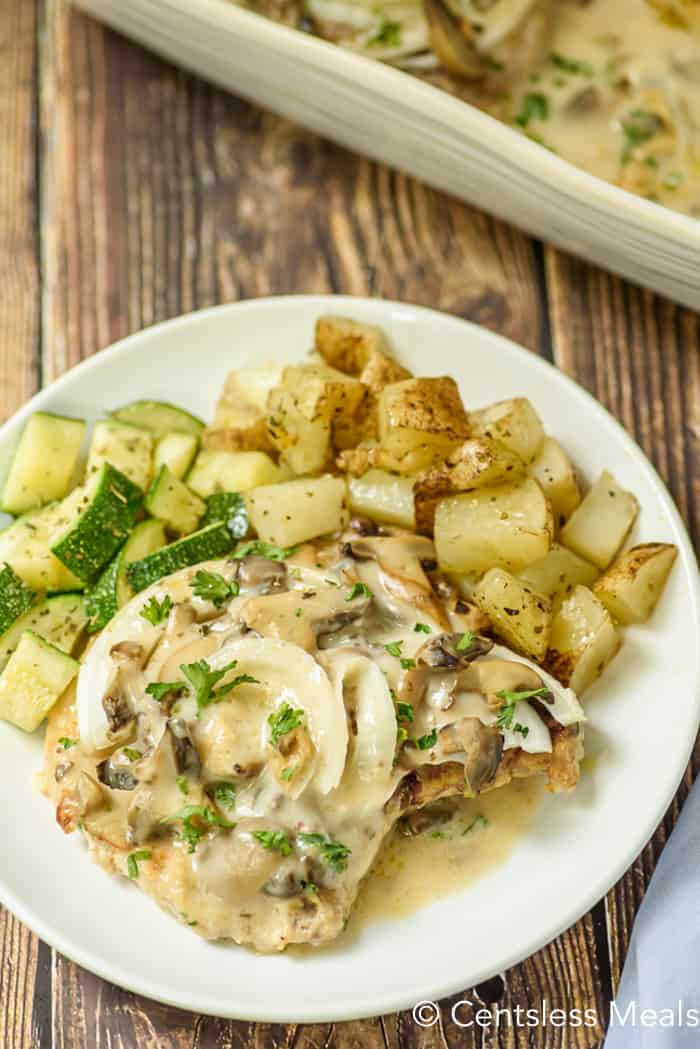 Serve Pork Chops with these Sides

You’ll want something starchy to soak up all that luscious gravy. Fluffy rice or buttered noodles are my favorites.

To complete the presentation, serve with toasty and cheesy breadsticks and some oven-roasted asparagus or parmesan roasted leeks. Now that’s a meal fit for a king! 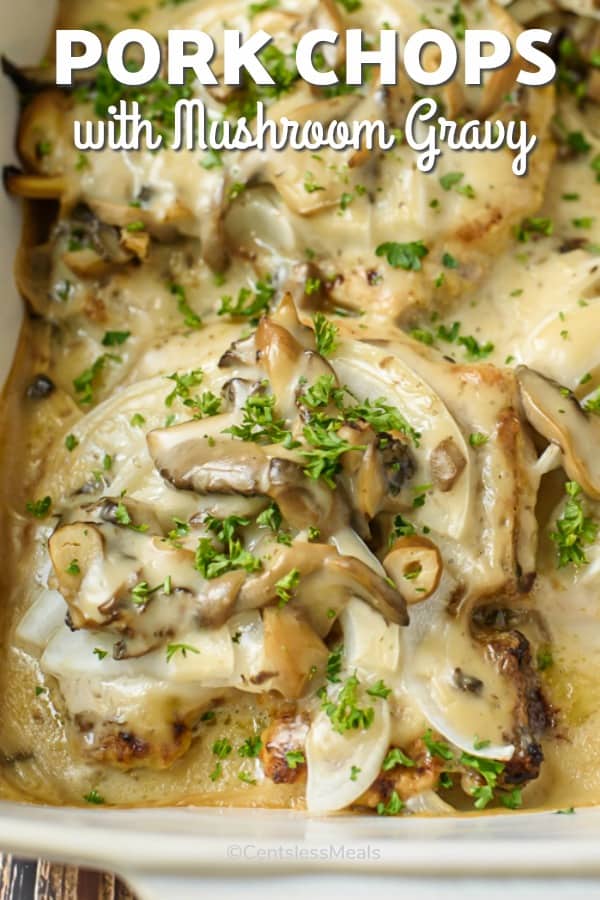