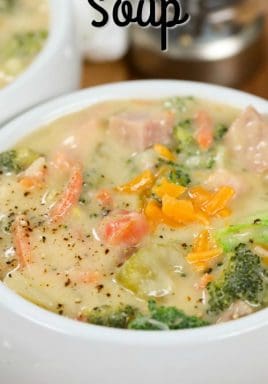 Ham and Potato Soup is going to be one of your new favorite comfort food staples. Chunks of juicy ham are mixed with delicious potatoes, chicken broth, seasonings, and some of my favorite veggies like broccoli and carrots (and of course cheese) to give you a one stop meal that you will not be able to get enough of! 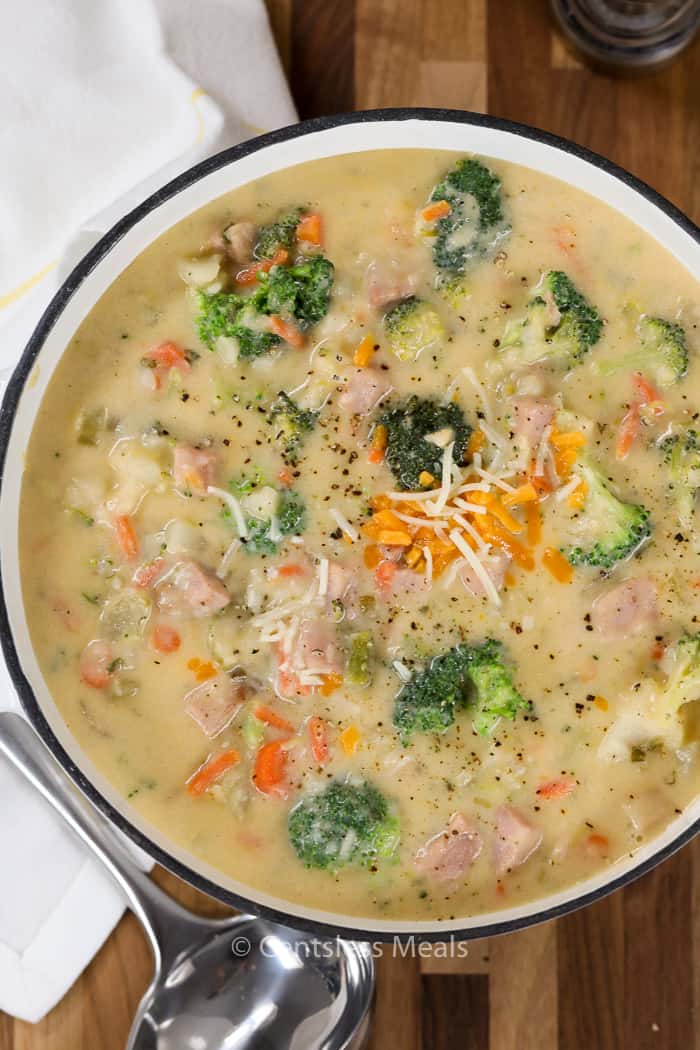 Pin it to your SOUPS BOARD to SAVE it for later!

If I am pressed for time during the busy work week and don’t have time to pull the slow cooker out to make a soup like this slow cooker chicken soup, this ham and potato soup is always my go to!

One of my favorite things about ham and potato soup how thick it is. Not only is the soup thickened with flour, but the starch in potatoes does an excellent job of doing the thickening!

This potato and ham soup is the perfect soup if to make in a large batch and freeze for later (I also love batch cooking Easy Potato Corn Chowder or Broccoli Soup), because it is made with a chicken broth base. 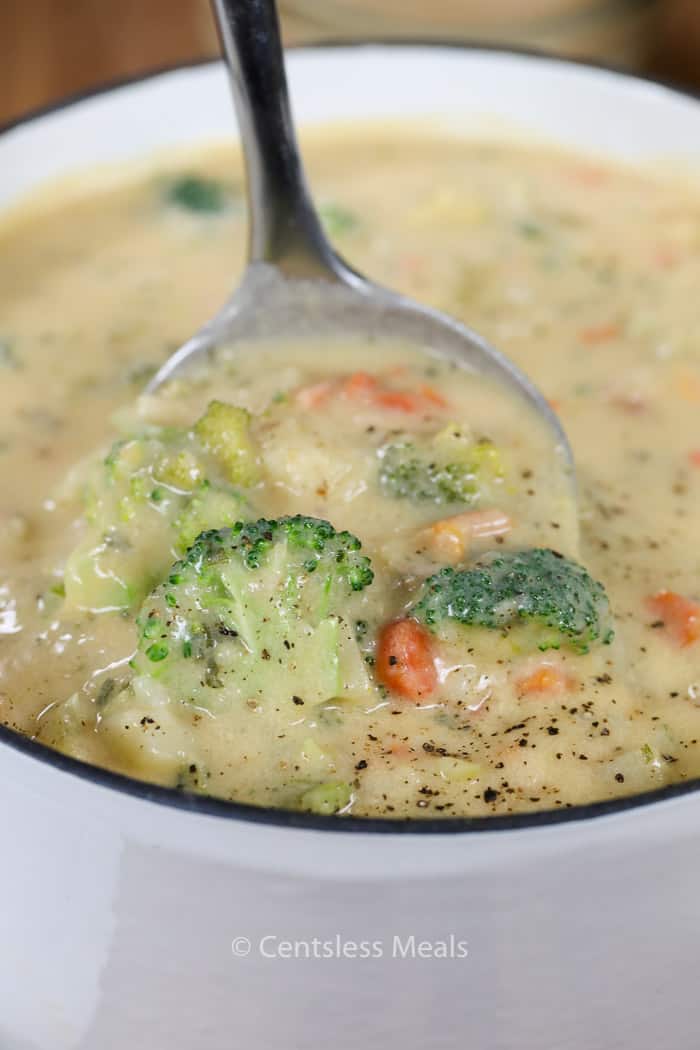 Just make sure to heat it back up slowly on the stovetop when you reheat it so you don’t change the texture of the potatoes or the consistency of the soup. I love making it in batches for those days that I just don’t feel like cooking!

I mainly just use celery, onion, and broccoli in this recipe, but if you have any extra veggies you want to use up, ham and potato soup is perfect for it! Corn, peppers or peas all make great additions to this soup recipe.

Whenever I make this ham and potato soup recipe, my daughter always gets so excited. She will come home from school and get so excited to enjoy some of this heaven in a bowl!

How To Make Potato Soup

To make a cheesy ham and potato soup like this one, you want to start by pre cooking your celery, onions, and carrots to soften them up a bit.

Then, add your potatoes, chicken broth, broccoli stems, and simmer the mixture until your potatoes are softened, which should take about 15 minutes. 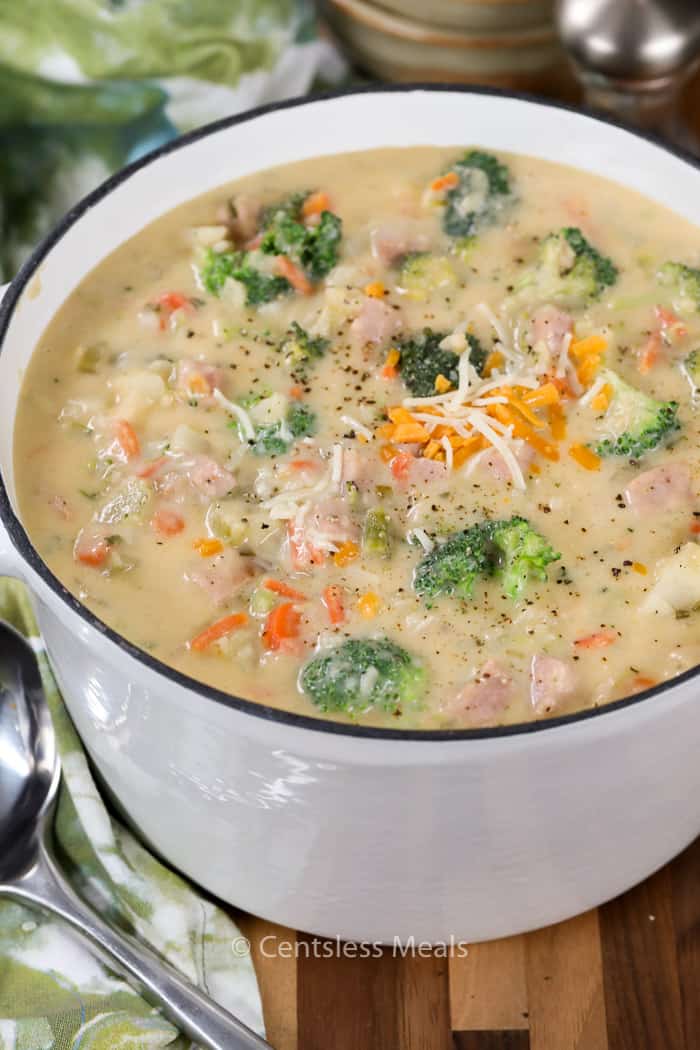 Next, you want to make your ‘roux’, the mixture of flour, milk, and cream. Add your milk mixture, broccoli, and ham to the pot. It is very important to make sure your pot is at a simmer rather than a boil, or you will risk curdling your soup.

Finally, to thicken your soup a bit, use a potato masher and lightly mash your ham and potato soup. This will help to release the starches into the soup which will in turn thicken it. Add your cheeses (my favorite part) and pepper, and you are set! 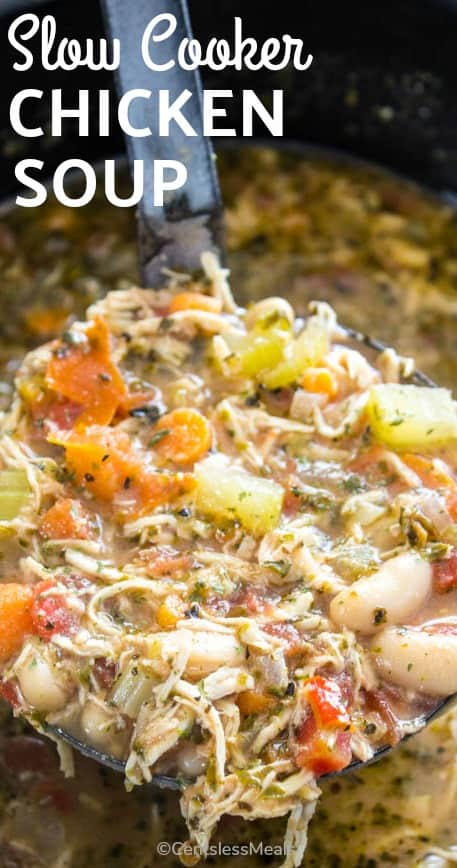